I tend to be a bit picky when it comes to vampire movies. I don’t really need them to be unique, to show me something new about the vampire or to even be works of art. Mostly, I just want to be entertained with the general myth being adhered to. 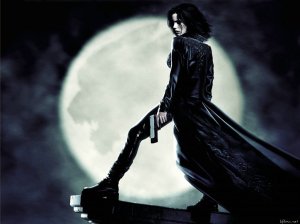 That’s why I love the Underworld movies. A lot of folks look at me strangely when I say it is one of my favourite – if not favourite – vampire movie series. They talk of poor acting and bad lines, but I like the acting and I thought the lines worked. I’m not after Oscar-award-winning performances.
My favourite part of the trilogy is the sheer thought that has gone into the world-building of the Underworld universe. I think I liked the third movie, Rise of the Lycans, the most, as it tells the story of how the feud came about, of why Lucien hates vampires and why Viktor is so hell-bent on destroying Michael, a vampire/werewolf hybrid.
There is no sleeping in coffins or stakes through the heart – humans generally die if they’re bitten by a vampire – but sunlight is deadly. Humans are noticed about as much as we notice cattle in a field; they’re a curiosity, but not important to a vampire’s daily life.
Rather than summarise each movie, it is perhaps better to look at the mythology of the universe itself, as this is what I love anyway. N.B.: Spoilers do abound.
In this universe, immortality was an accident, a mere genetic fluke. Alexander Corvinus, the first immortal, was the only survivor of a plague that killed everyone it touched. He had three sons, Markus, William, and another. One son was bitten by a bat, one was bitten by wolf and one remained human. Markus and William were the very first vampire and werewolf while the human child carried the immortal gene in a dormant form.
William was uncontrollable; everyone he bit rose as a ‘wolf, but with no control, no ability to turn human again. The werewolf gene was like a curse, unstoppable and uncontrollable. Markus, in order to save his brother, made a deal with a local king, Viktor, who he transformed into a vampire in order to help prevent his brother’s rampages. But Viktor tricked Markus, locking William away and forcing Markus to pretend he wasn’t the first of their kind.

Viktor then studied the werewolves created by William, hoping to control them somehow, as he wanted guards that would protect his vampire clan during the daytime. Eventually, a baby was born to a ‘wolf: Lucien. Viktor thought to kill him, but decided to wait, hoping that his werewolf guard was still a possibility. And it was.

Lucien was really the first werewolf, a true Lycan. He could control his transformations and those he bit also were able to return to human form. He was strong – he didn’t need the full moon in order to change form. He was also dominant; the werewolves created by William obeyed Lucien as if he were their true master.
However, Viktor’s plans went awry: he didn’t count on his daughter falling in love with Lucien or the fact that she would fall pregnant with his child. Horrified by the mixing of the lines, Viktor exposed his only child to the sunlight and let her perish in front of Lucien’s eyes.

And so began the war that lasted centuries: werewolves against vampires. This is where the first movie begins, with Selene, a Death Dealer with a striking resemblance to Viktor’s daughter, hunting werewolves who are trailing the human, Michael Corvin. Intrigued as to why a human would be of interest to werewolves, she follows the young doctor.
Only to have the reasons for the war start all over again.

The fourth instalment of the Underworld universe is due out next year. I’m rather looking forward to it.

English teacher, writer, editor, publisher, reviewer and blogger. Founder of publishing company, Morrigan Books and imprint, Gilgamesh Press. Also cycles, listens to lots and lots of music, reads a ton of books and tries to fit in some TV, film and writing too. END_OF_DOCUMENT_TOKEN_TO_BE_REPLACED
This entry was posted on Wednesday, August 4th, 2010 at 12:00 and tagged with amanda pillar, underworld, vampires and posted in Film, Vampire Awareness Month. You can follow any responses to this entry through the RSS 2.0 feed.
« ‘American Vampire’ review
’30 Days of Night’ Review »

6 responses to “The ‘Underworld’ series – thoughts”